All Collections
Script & Sides
How to format your script for SetKeeper

How to format your script for SetKeeper

Everything you need to know about formatting your script

Written by Emily
Updated over a week ago

Our Script module makes it easy to create sides based on scene numbers, characters or sets. But first you have to format your script so you can import it correctly! Here's how to do that.

If you're a visual learner, you can use this script to see an example of formatting that SetKeeper accepts. 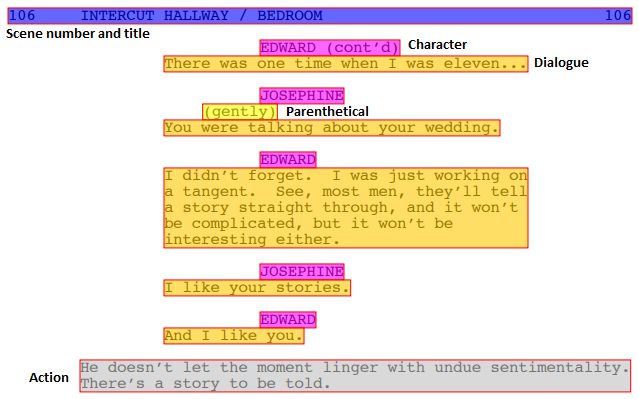 All your scenes must be numbered for the algorithm to read it correctly. They must appear on the left side of the page, before the scene name. Scene numbers on both sides of the scene name are optional.

Below is a list of accepted scene numbering formats:

Character names should be centered on the page and typed in ALL CAPITAL LETTERS.

Dialogue is also centered on the page but is 10 spaces to the left of the character name (that is, two "Tab" button space away to the left).

Note: For now, SetKeeper does not support scripts that contain dual dialogue (two characters speaking at the same time). If this occurs in your script, it will probably generate an error message. If possible, adjust the script so that the characters speak one after the other and re-upload it.

Parentheticals are 5 spaces in from dialogue, and 5 spaces out from the character name.

Action is not indented at all and is usually typed as a single block of text, with an "Enter" space between events in a script.

If you have any further questions, concerns, or troubles, you can always contact us at support@setkeeper.com. We'll be happy to help!

Congratulations! Now your script is ready to be imported into SetKeeper! 💪

Did this answer your question?